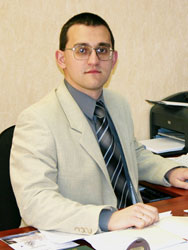 In addition, O. E. Gridnyev is well known among scientists and doctors for his scientific works of the study of comorbidity of digestive diseases with other diseases, including GERD and AH, GERD and obesity, non-alcoholic fatty liver disease and disorders of lipid metabolism, etc.

He was actively involved in the work of the European Group on the creation of a stool bank for fecal microbiota transplantation.